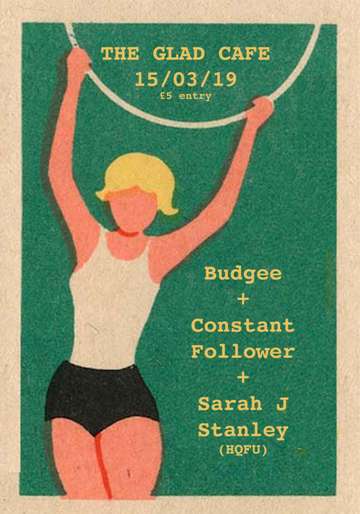 Budgee is the latest incarnation of Canadian songwriter Celine Brooks, playing songs from her new album Swing the Barkley to be released by Discolexique Records in spring. Taking influence from a wide range of styles from classic pop to Americana, but with a distinctly modern lyrical style and the occasional touch of observational dark humour, Budgee builds on the best of the past to create a music which is at once familiar and accessible whilst still being highly contemporary. Joined on stage for this show by ambient/folk guitarist Gareth Dickson (“haunting, an artist of real originality” The Wire) who also tours with the godmother of freak folk, Vashti Bunyan.

Sarah has been a fixture of the Scottish folk circuit for some time, playing under her own name as well as touring her celebrated solo electro project HQFU. Sarah has also more recently lent her vocals and instrumentation to several other projects including Ladytron and R.M Hubbert, among others. She is currently working on a new folk album for release in 2019 along with another HQFU release.